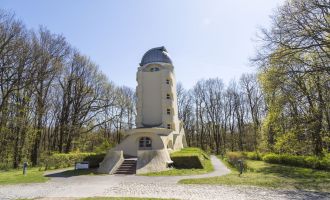 The Einstein Tower is the most impressive construction on the Telegrafenberg Hill in Potsdam. It is the first and one of the most famous constructions by the architect Erich Mendelssohn. The tower was completed in 1924 and is esteemed to be one of the most inventive and most important buildings of the 20th century. Until World War II Einstein Tower used to be the scientifically most important solar telescope in Europe. Today the Leibniz Institute for Astrophysics operates the solar observatory in the tower. The observatory is provided with up to date technology for astronomers to monitor solar activity.
Visits are permitted in guided tours with pre-registration.